Congratulating on the 77 years long existence of the "Orao" a.d., Mr. Petričević said that it is important that "Orao" a.d. still operates in the sphere of work for which it was founded,  and that it represents a significant capacity of the arms industry of Republika of Srpska.

"It is our responsibility and obligation, together with the management and all the relevant institutions, to secure the future of “Orao” a.d.," Mr. Petričević said, explaining that this will also be achieved through employment.

He noted that it is important to contract new joint activities with Serbia in order for “Orao” a.d. to continue with its business activities.

Acting director of "Orao" a.d., Mr. Mladen Stojanović, said that the business year 2021 is one of the most successful in the post-war period, and he expressed his belief that all obligations planned for this year will be completed on time. 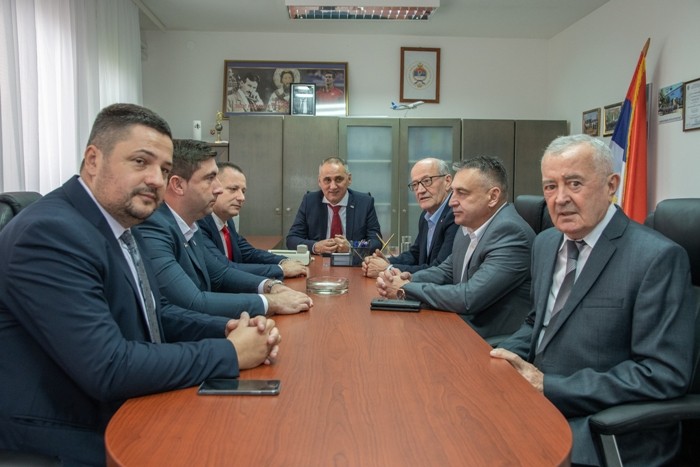 "We are already thinking about plans for the next year. Today, among our guests are our customers and we are taking the opportunity to discuss these issues with them," Mr. Stojanovic told to the reporters in Bijeljina, where the 77th anniversary of “Orao” a.d. was marked and a memorial service for died workers was held.

He said that today is a special day for all the employees of “Orao” a.d., since 77 years of its existence is being marked.

"It is our obligation to respect the tradition and anniversaries and to celebrate them”, said Mr. Stojanović at the memorial erected for the 23 workers of "Orao" a.d. who gave their lives for Republic of Srpska, “ and thus we commit to continue to work harder ".

Mr. Stojanović expressed his hope that "Orao" a.d. will celebrate hundreds of years of its existence, because it deserves it.

The mayor of Bijeljina, Mr. Ljubiša Petrović, thanked the people who, as he said, carried thousands of tons of material on their hands and took the entire "Orao"a.d. out of Rajlovac and brought it to Bijeljina, where 341 workers are employed now.

"I am pleased that an economic giant such as “Orao” a.d. is now in Bijeljina. The satisfaction is even greater when we see dear guests from the Serbian Ministry of Defense," said Mr. Petrović, adding that the City Administration is available to this company when it comes to resolving the issue of accumulated property-legal relations and access roads.