Certificate of Appreciation for successful cooperation

The Commander of the Air Force and Air Defense of the Serbian Army, Lieutenant General Duško Žarković, awarded a Certificate of Appreciation to the company "Orao" JSC for successful cooperation in 2021. The Certificate of Appreciation came as a result of meeting the contract deadlines and delivering  quality work which was recognized by the Ministry of Defense of the Republic of Serbia. It proves that "Orao" JSC main customer, the Ministry of Defense of the Republic of Serbia, can rely on "Orao" JSC to be its trustworthy and certain partner for the current and all the future businesses in the field of aircraft engine overhaul.

"The previous year was marked by the realization of the contract for overhaul of 12 engines, Viper series. The Contract realization has confirmed that strategic commitment of “Orao” JSC is to maintain a continuous cooperation with the Ministry of Defense of the Republic of Serbia, all in order to maintain the aviation market-oriented business system, realize new joint projects and fulfill “Orao” JSC  business capacities.

"Orao" JSC is a reliable and stable resource for maintenance of turbojet engines. The ultimate goal for Air Force of the Republic of Serbia is to be ready to take on all the tasks that await them in the peacetime, and for the pilots of the Air Force of the Republic of Serbia to have reliable and safe engines and aircrafts, and to return safe and sound to their families.

The Certificate of Appreciation is a crown of one successful year, but also an obligation to be more proactive in the following period and initiate new mutually  beneficial activities, "said the director Mladen Stojanović. 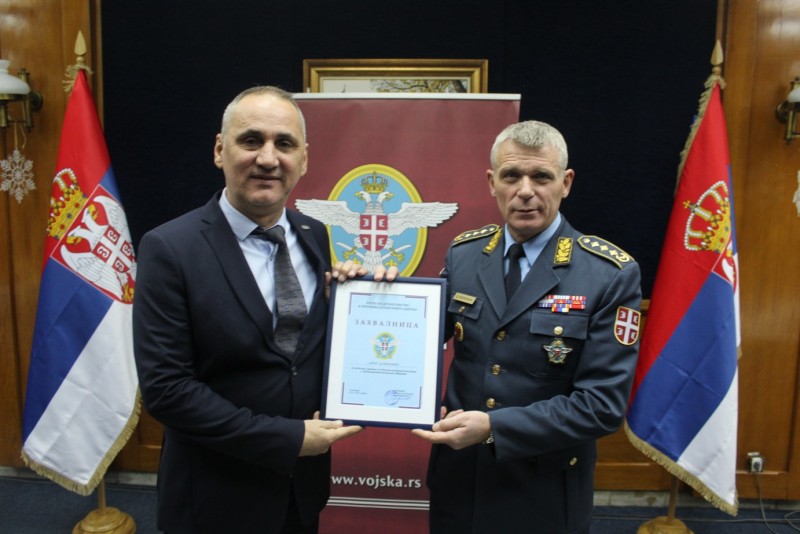